The Ara Pacis Augustae is the 'Altar of Peace' in Rome. This peace stamp used to stand on the Martian Field in honor of the return of Augustus after a peacekeeping mission in Gaul and Spain.

Altar of Peace in Rome

The Ara Pacis (Latin, "Altar of Peace") is an altar in Rome dedicated to peace. The personification of peace is depicted as the Roman goddess Pax. The Ara Pacis was dedicated on January 30 in 9 BC, the birthday of Augustus his wife Livia.

It is also referred to as the Ara Pacis Augustae ("Altar of Augustan Peace") because it prompted the return of Augustus from Gaul and Spain. August had been there for a long time on a peacekeeping mission. In previous decades, there had been several civil wars in the Roman Empire and Spain and Gaul had been at war with each other. After so many cruel years, the Senate now celebrated peace with the construction of an "Altar of Peace." At the time, it was also a means of propaganda to further enhance the image of Emperor Augustus. 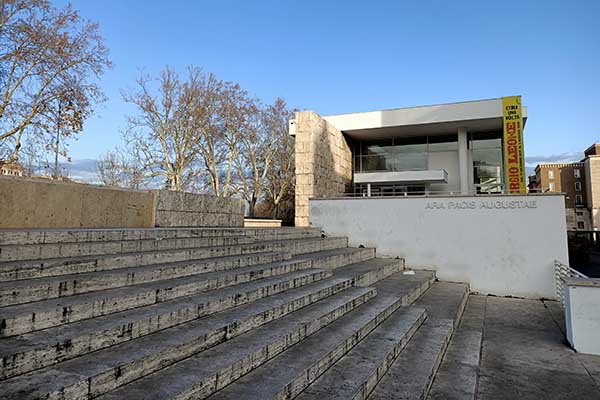 The controversial modern building of Ara Pacis in Rome 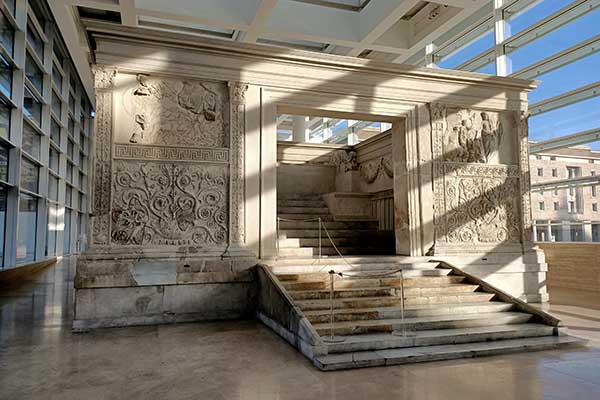 The altar of "Ara Pacis" is very detailed and consists of Carrara marble and is a masterpiece of Roman sculpture. In the museum you can learn more about the background of all the reliefs, which include Augustus, the senate, the people, the goddess Roma and Romulus and Remus. For example, on the altar is the text "Res gestae divi Augusti", or the deeds of the divine Augustus. At that time Augustus was equated with the gods. If you want to know more background information about the reliefs, I advise you to rent a video guide. Unfortunately, the information boards in this museum are rather sketchy.

Originally, the Ara Pacis was not located here, but outside the city walls in the field of Mars (Campus Martius), at the time an open plain north of the city. It was not until 1938 that all parts of the peace altar had been excavated and gathered together so that they could be displayed at the current location. In 2006, architect Richard Meier designed the modern and striking museum building, making it one of the few modern buildings in the center of Rome.

Next to the site is also the "Mausoleum of Augustus", a burial mound consisting of four layers. The mausoleum dates from 28 BC and was the resting place of both Augustus and his immediate family. Unfortunately, there is little left of the original mausoleum due to looting and vandalism and this is actually not an attraction.

Where is the Ara Pacis in Rome?