Visit Palazzo Colonna, one of the oldest and largest private palaces in Rome. The accompanying Galleria Colonna is a hidden gem not to be missed when in Rome on a Saturday morning..

The Palazzo Colonna is one of the oldest and largest private palaces in Rome and a hidden gem that you should not miss when you are in Rome on a Saturday morning. Construction of the palace started in the 14th century by the Colonna family. The exterior of the palace looks Renaissance and you will hardly notice it in the street scene. The interior is all Baroque by the architects Bernini, Carlo Fontana, Johan Paul Schor and the first architect Antonio del Grande. Eight centuries later, the Colonna family still lives in this palace near Piazza Venezia.

From 1300 to 1500, the palace functioned as a family fort. Oddone Colonna, elected Pope Martin V in 1417, appointed the palace as papal seat and lived there from 1420 to 1431. This pope laid the foundation for a cultural, urban and administrative rebirth of the city. In 1527, during the sack of Rome by the troops of Emperor Charles V, Palazzo Colonna was one of the few buildings that was not destroyed. This is because of the good relationship of the family with the empire. 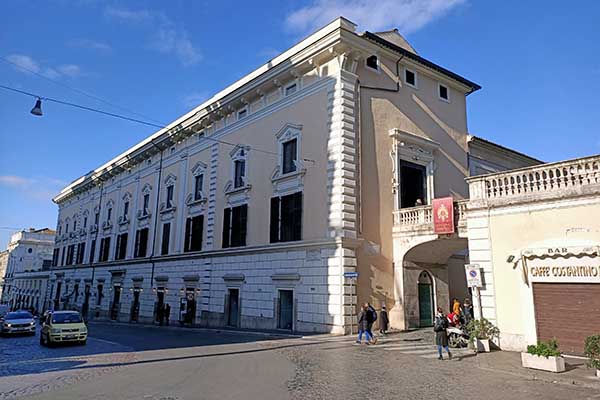 The unremarkable gallery of Palazzo Colonna in Rome

The Roman Baroque gallery of Palazzo Colonna can only be visited on Saturday morning. This gallery was added in the 17th century by order of Cardinal Girolamo. The spaces of Galleria Colonna show the family's art collections with sculptures, frescoes, precious furniture, but above all paintings by prominent Italian and foreign artists from the 15th and 16th centuries. You will find works of art by Pinturicchio, Tintoretto, Cosmè Tura, Carracci, Guido Reni, Salvator Rosa, Bronzino, Guercino and Vanvitelli. Convenient of the museum is that you get a book at the entrance of the Palazzo Colonna museum in which you can look up all 270 numbered works of art.

If you are in Rome on a Saturday morning, don't miss your chance to visit Colonna Gallery. The palace is truly a hidden gem in the city, which is not yet flooded by mass tourism. You can already book your Galleria Colonna tickets online.

Where is Palazzo Colonna in Rome?