At 29 kilometers from Rome is the town of Tivoli with the Renaissance palace and gardens of Villa d'Este and the Roman excavations of Villa Adriana, the villa of Emperor Hadrian.

The beautiful villas of Tivoli Italy

If you have a longer stay in Rome it can be fun to take a day trip to the town of Tivoli, which is 29 kilometers east of Rome . In the green surroundings of Tivoli Italy you will find a number of historic villas. The 16th century Villa d'Este is a beautiful example of a Renaissance palace with beautiful palace gardens. Villa Adriana is located a few kilometers outside Tivoli and are the Roman remains of the enormous villa of Emperor Hadrian. The other well-known villa in Tivoli is Villa Gregoriana, which is mainly visited for the huge waterfalls in the gardens.

The Villa d'Este is a palace with accompanying gardens and is one of the best preserved examples of the refined culture of the Renaissance. The palace and grounds had an innovative design for the time and together with the architectural aspects in the garden, including the fountains and ornamental basins, the villa is a unique example of sixteenth-century Italian Tivoli gardens. The Villa d'Este thus forms a model for the development of later European gardens. The well-known Livio Agresti has contributed to the construction of the beautiful interior of the villa. Partly for this reason, Villa d'Este has been included on the UNESCO World Heritage List. 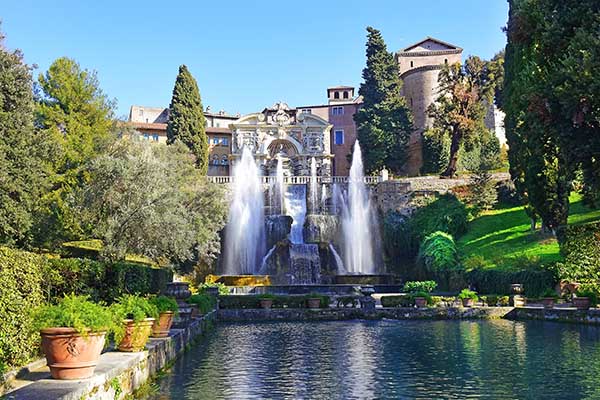 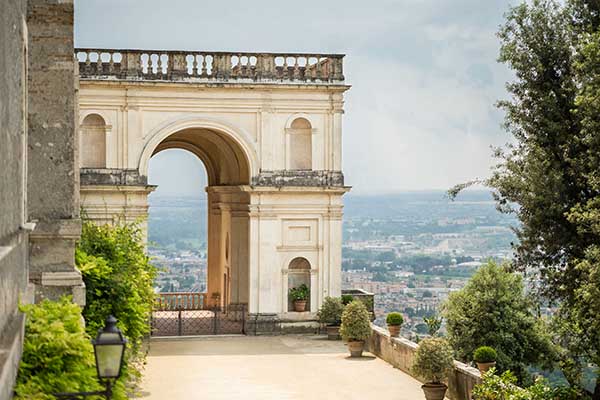 Villa d'Este is located in Tivoli in the Sabine Mountains. The complex consists of the Palazzo and the gardens and covers an area of approximately 4.5 hectares. In Roman times, residences of noble families were often built in this area near the waterfalls in the Aniene River. The Villa d'Este belonged to the Dukes of Ferrara, who belonged to the ancient Este family. The Este family in Ferrara was the epitome of a court in which art and culture were central. No wonder that this love for art and culture has been taken over in the holiday residence of the Este family with a lush Renaissance garden and beautiful waterworks.

Both the palace and the Tivoli gardens were designed by Ligorio at the behest of Cardinal Ippolito II d'Este. The building plan of the villa is irregular in the sense that the architect was forced to use parts of the former monastery that was on that site. On the side of the palace gardens, you can see a simple view of a three-storey building marked with rows, bands, windows and side pavilions. This elegant appearance is interrupted by the loggia in the middle. It was intended that many fountains would adorn the Tivoli gardens and it was decided to use several flattenings, descending from the palace to the flat terrace. This descent is shaped like an amphitheatre. That way the water from the mountains could flow to the rest of the garden by its own gravity.

Tivoli has a second palace in its sights, which is a must-see. This is the Villa Adriana, the villa of Emperor Hadrian. The palace is located four kilometers west of Tivoli and was built between 126 and 134 AD. The estate covers an area of 120 hectares and consists of an Imperial Palace, seaside resorts, libraries, theaters, staff quarters, a swimming pool, underground passages and even a sports stadium. You will also find huge palace gardens with many works of art. There were even caves, animal parks, fountains, waterfalls and fishing pools. Not surprisingly, Villa Adriana is one of the richest and largest complexes of Classical Antiquity. 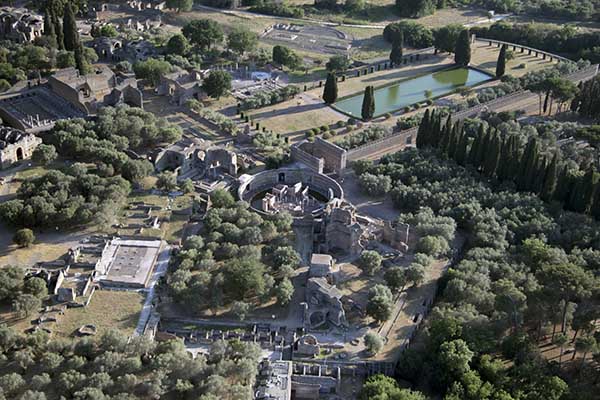 The large complex of Villa Adriana 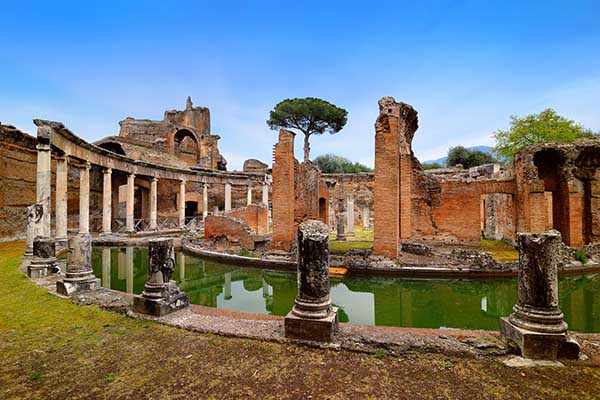 Emperor Hadrian wanted to build his villa according to the standards of the Hellenistic court culture and far surpass Nero's Domus Aurea. The land was already owned by the emperor and his wife and he soon had a palace built on the site of a former republican villa. The complex blended into the soothing and natural landscape of the surrounding mountains. It is striking that Hadrian did not build his palace on the hill, as was customary, but on a lower location. This would provide the palace with the supply of water and it was protected from the north wind and at the same time provided with a gentle west wind in summer.

There is plenty to do and see at Villa Adriana. It is an exceptional complex in the classicist architectural style, which combines architectural elements of Egyptian, Greek and Roman architectural styles. A very famous part of Villa Adriana is the fountain square in the gardens. The central square filled with fountains gave access to other parts of the palace, such as the hall, the suites and the library. The Teatro Marittimo also appeals to the imagination due to its unusual shape. It is not a theatre, as the name suggests, but a separate villa located on an island. The function of this villa is unknown to this day. Some say it was a huge swimming pool, others say this villa served to isolate the emperor. The Pecile is a huge swimming pool of more than a hundred meters, which was situated in the palace gardens. The Piazza d'Oro is a building on the west side of the complex, characterized by a quadrangular colonnade with a pond surrounded by a garden in the middle. There are even more beautiful elements to mention, such as the theatres, the stadium and the underground corridor system. However, it should be clear: a visit to the Villa Adriana is more than worth it when you visit Tivoli.

3) Villa Gregoriana and the rest of Tivoli

Besides the two World Heritage monuments mentioned earlier, there is much more to see in Tivoli Italy. For centuries, Tivoli's slightly cooler hillside location was a refuge from Rome for the wealthy. The area of Villa Gregoriana is also worth a visit. Not so much the villa itself, but the green park around this villa. At the time, there were many houses around the ravine, but after a flood many houses were destroyed and a large waterfall was built here by order of Pope Gregory XVI for prevention. You can visit these gardens of Tivoli to take a nice walk. 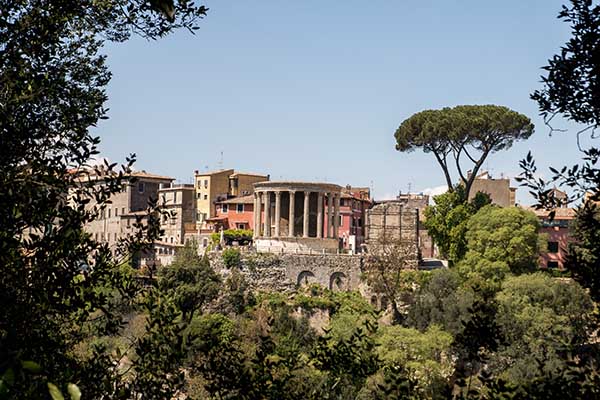 In the gardens of Villa Gregoriana

Where is Tivoli in Italy?